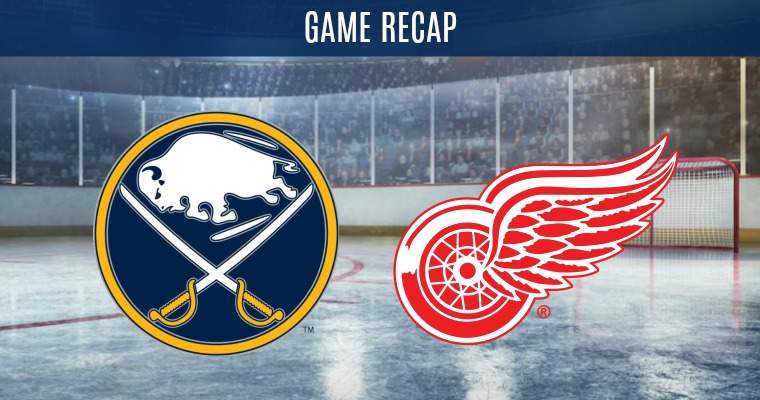 Well, that certainly was fun. Jeff Skinner potted two goals, which gave the Sabres forward 40 goals on the season, and the Sabres royally drubbed the hosting Detroit Red Wings 7-1.

Skinner’s 40th came on a beautiful play, started by Rasmus Dahlin, as the rookie defenseman kept the play alive at the blue-line and drug the puck to the near boards, then threw a pass back to a streaking Skinner, who with one motion, moved the puck through Anthony Mantha and beat reserve goaltender Kaden Fulcher on the far side with a snap shot to move the Sabres lead to three goals.

Dahlin was already on the scoresheet from a goal he scored earlier in the contest, which was also a beauty. With the Sabres on the power play, Jack Eichel and Rasmus Ristolainen worked some nice puck movement at the top of the zone, when the puck eventually found Dahlin, who crept up the near face-off circle and took a great wrist shot that hit just inside the far post and went in for a 2-0 Buffalo lead.

It was a total team effort on the scoresheet, as aside from Skinner’s two, and Dahlin’s single, Sam Reinhart, Connor Sheary, Zemgus Girgensons, and Brandon Montour also lit the lamp for the Sabres on this evening.

Eichel intercepts the #LGRW pass and gives it to Reinhart who puts it in. 1-0 #sabres pic.twitter.com/VSleb3WL1i

Linus Ullmark was tested a bit early in the game but only conceded a single power-play tally to Anthony Mantha. All in all, Ullmark made 23 saves on 24 total shots.

Jimmy Howard, though historically terrific against the Sabres, had a forgettable night in net for Detroit. Indeed, he didn’t have much help at his disposal, but after allowing five goals on 26 shots, the Red Wings had enough and pulled him for the aforementioned Kaden Fulcher, who in his NHL debut stopped nine of eleven Buffalo offerings.

Up next for the Sabres, well, is the offseason. It’s true that the Sabres won two games in a row for the first time since the holidays were on everyone’s minds. All of these things are fairly trivial in nature, but for Sabres fans, it’s nice to see winning. Detroit may have looked like they were skating in quicksand all night, but the Sabres took it to them and ended the season on two very positive notes.

Draft picks are nice and the Sabres have stockpiled a great deal of them throughout this drought and rebuilding phase. It’s time to see winning. This modest two-game win streak won’t mean anything when the puck drops again in October for the 2019-2020 season, but at least for a fleeting few days, Sabres fans got what they’ve deserved all along. A team that played with heart; a team that played for each other. We can all agree that at the end of the day, that’s what we’re hoping for. Let’s Go Buffalo!