With the Covid-19 Pandemic bringing the Buffalo Sabres’ season to an unexpected end back in March, their underwhelming success was minimized with something much bigger taking the forefront of our attention. While the season didn’t go as many had hoped, there were some still positives to take away from it.

With this year being the 5oth Anniversary for the Buffalo Sabres, there were many different aspects of this particular season compared to past seasons. Some turned out great, some did not. But the design of the 5oth Anniversary jerseys was extremely well done. While only sporting the new sweaters a handful of times this season, the golden threads added a certain flair to the team. The first time the “new jerseys” were worn was the home opener against the New Jersey Devils. A bit of a pun, but the game was electrifying with a 7-1 victory as the result. 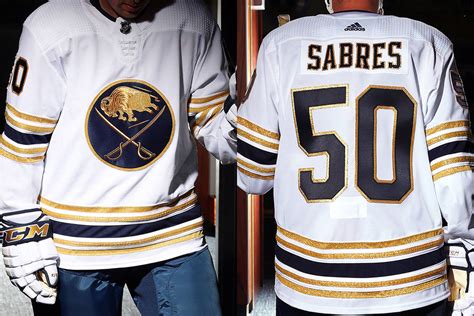 Although these gems were on short supply, there is no denying that these are not only one of the best Sabres’ jerseys, but debatable for one of the best hockey jerseys of all time. While there has been no confirmation, it is rumored that these could return as the 3rd jersey next season.

Jack Eichel and his Streak

In his 5th season in the NHL, Jack Eichel took yet another step in his production and overall development. He recorded career highs in several categories, but most notably in the goals department with 36 in just 68 games. With 13 games remaining on the schedule, it is likely that Eichel would’ve reached the 40-goal mark for the first time in his young career. Eichel intentionally worked on his shot over the last off-season and it showed. His shooting percentage went up from 9.2% last season, to a staggering 15.9% this season.

Arguably the best part of the season (after October) was Jack Eichel’s 17-game point streak. After a horrible start to November for the Sabres (0-4-1), Jack Eichel pulled his bootstraps up and single-handedly defeated the Ottawa Senators by scoring all 4 Sabres goals which led to a 4-2 victory. Over the 17 game point streak, the Sabres managed to go (7-6-4). Although this record isn’t flashy, it kept the Sabres in the playoff hunt for the time being. Jack Eichel vaulted himself into the Hart Trophy race during this streak thanks to his 31 points (16 goals, 15 assists).  Without Eichel leading the way, the Sabres would’ve fallen out of the race much earlier in the season.

With much anticipation heading into the season of where Victor Olofsson would play and how he would do in the NHL, it is safe to say that the Sabres have a legitimate draft steal on their roster. After being selected in the 7th round of the 2014 NHL Draft, Olofsson put his time in and developed into a top 6 NHLer. Although missing 15 games due to injury, Olofsson still managed to be a top 3 point producer on the Sabres while recording 20 goals, 22 assists for 42 points in just 54 games. That’s a 64-point pace over an 82 game regular season.

While riding shotgun with Jack Eichel and Sam Reinhart on the top line for most of the season, Olofsson enjoyed his role on an electrifying line as well as the top Power Play unit. The trio developed phenomenal chemistry that should continue for many years. Unfortunately, Jeff Skinner’s production took a steep dive while away from Eichel. Regardless, the rookie Swede lived up to expectations in his first season in the NHL. He should pick up where he left off last year and aim for the 30-goal mark next season.

With the addition of Mike Bales as goalie coach and the continued development of Linus Ullmark, there is a potential bright spot in net for the Buffalo Sabres. Although Ullmark still has much to work on, he is trending in the right direction and has been ever since he was drafted in 2012. Heading into the 2020-21 season, Ullmark will be 27 years old and is ready to take on a full workload as an NHL starting goalie.

After the blockbuster trade that sent the future Conn Smythe Trophy winner out to St. Louis, Buffalo has had a huge void at the 2nd line center position. With the 7th overall pick in last year’s draft, the Sabres went with the big center out of Lethbridge, AB. While he has yet to play a game in the NHL, there is some hope that he can fill the 2nd line center role behind Jack Eichel. After putting up 34 goals, 50 assists for 84 points in 68 games in his draft year, Cozens took yet another step up this year. In 17 games less, Cozens recorded a staggering 38 goals, 47 assists for 85 points in just 51 games! To put that into a better perspective comparing this season to last, Cozens would’ve been on pace to score 113 points in 68 games.

Cozens was named Eastern Conference Player of the Year by the Western Hockey League. He was also nominated for the Four Broncos Memorial Trophy, awarded annually to the league’s player of the year.

It is very likely that Cozens makes the jump to the NHL next season full-time. Whether he steps in as the 2nd line center or plays wing is still to be determined, but one thing is for sure, the Sabres have a great young player in Dylan Cozens.

Overall, it was a disappointing season, especially missing the 24-team playoff format by such a slim margin. With such an extended off-season for Buffalo, it will allow younger players to grow into their frames a bit more and hopefully, a better season will be in store for suffering Sabres’ fans.